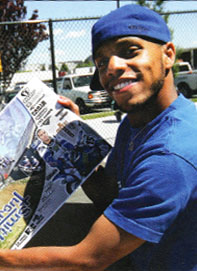 OK, here goes journey #2. Off to the “Sin City” known as Las Vegas. I talk to Rick Distler about my journey there. He’s like, “Well, why don’t you bring your take-off ramp and landing, and come stay here for a week or so?” I told him that would be great. I also asked him if he could find someone who owned a foam pit so I could practice some new tricks. He got hold of the boys from Chapter 11, and they were cool with letting me come and hit their own foam pit.

So, might I say, my first time ever hitting the foam was great. I got to practice Saturday and Sunday, so I didn’t have too much time in it, but enough to learn some new tricks. Monday I set up my ramp at Rick’s and practiced over there. Rick Distler is the owner of the #1 freestyle ramp company in the world, FMX Ramps. He built my whole setup, take-off and landing. If you ever need a sweet set-up with take-off and landings for the minis, FMXRamps.com is the place to go.

Tuesday rolled around and my boy Paul Distler got on his 50, I hopped on my 90, and he took me roaming through his neighborhood. In his area it is legal to ride minis on the road, so we were on a sidewalk going past these huge homes, when all of the sudden Paul jumped off the sidewalk, and headed down a really big grass hill. He just disappeared! All of the sudden he came ripping up the hill, wide open in third gear. I’m like, “Man, this kid is gonna kill himself if he hits the side of that sidewalk going that fast.” All of the sudden he jumps his 50 wide open over the sidewalk all the way to the other side of the hill. It must have been a 20 foot gap. I just shook my head, raised my horns and gave that kid some props ‘cuz it was sick. Paul Distler got some huge Coca Nuts to be jumping a stock fifty like that!

Everyone please keep Robert Distler in your prayers. His house burned down and he lost everything – cars and his bike. It happened the day before I left to go to Vegas. He is one of the world’s best freestylers and I pray that he gets blessed with another bike so he can keep on riding.

OK, so off to Vegas I go. I wanna start this off by saying congrats to Tim Clark. If it wasn’t for all his hard work and dedication, none of this would have happened. Great job, Tim!!

After qualifying was done I set my ramps up next to the wall. So if I make one little mistake, I’m headed right for the wall. It was pretty crazy on my part. I didn’t get to do any 360 backflips like I wanted to, and I learned the backflip heel clicker that week and was also wanting to do that, but because of the spot I was in I could only do the regular backflip. 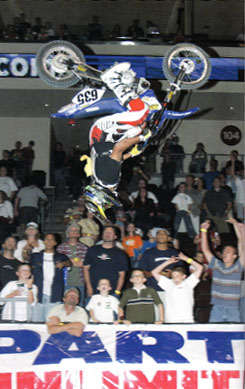 The show rolled around and as I was sitting waiting for them to get done with the introductions, I looked around the Orleans Arena and did not see an empty seat in the house. All those people came to watch a bunch of grown-ups race mini bikes and watch some freestyle. This sport is not getting any smaller.

The national anthem finished playing and I was part of the opening act. I ripped around the corner, hit the ramp, busted the flip and rolled out of the stadium as I heard everyone going nuts. Then the racing started. Halftime rolled around and now all eyes were on me, so I teased the crown a little bit by throwing a couple other tricks, then got down to the famous Back Flip ** or what my friends call it here at home, the Black Flip.

Thanks to Mark at PPS, who set my bike up with upside down forks and a sweet ***. Thanks to my sponsors: *** Scott, Pro Circuit, PARTS Unlimited, Monster Energy Drink, FCR Suspension, R.D. *** Chevrolet and Eric ***, Rob Buydos, Bevo, Rob Scott ** all the others I didn’t mention. Until next time, Go Mini Big.

Bright lights, big city, and really small motorcycles, those are the ingredients that made the PARTS Unlimited MiniMoto SX National such a tasty treat. This event took pit-bike racing to the pinnacle – a race inside the Orleans Arena in Las Vegas in front of 5000 plus enthusiastic mini bike fans.

Does it get any better than this?

The general consensus among the past MX champs and the rest of the nearly 400 entries was absolutely not.

To go along with the first-ever mini bike race of this scale, a vendor row was offered to help educate those not in the know about the complexities of mini bike racing. Booths included displays from some of the top aftermarket mini bike companies in the industry… 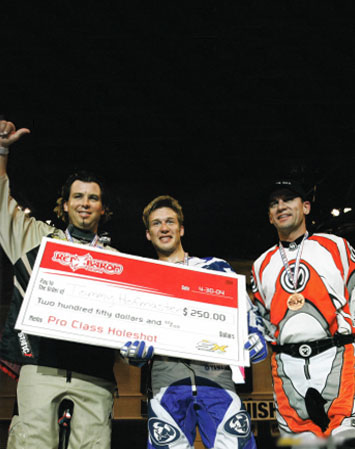 After the majority of riders were weeded out during daytime qualifying, the gates opened to start the night show, and most people didn’t really know what to expect, as there had never been another event such as this. It happened back to the first U.S. Open back in 1998. There was anticipation in the air.

After coming all the way from Hawaii, Derek Akiona started he night’s racing off right with a holeshot in the Xtreme class – a class dedicated to machines from the Xtreme Motor Co. It looked like he was gone, too, until Pro MXer Levi Humphrey started chasing him down, eventually making the pass to take the win over Akiona and Kurt Furomoto.

Then came the Stock 50cc class – one of the most ridiculous looking races of the night. This race was for Stock XR/CRF50s with only minimal modification allowed. The majority of racers used the paddle technique off the line, practically running with their minis to help get going.

Josh Camden took the holeshot leaving massive carnage behind him and Duane Brown right on his tail. Brown looked the funniest of the frontrunners, as he completely dwarfed his 50. Brown pressured Camden for a couple laps before giving way to a charging Brian Piccirelli, who not only chased down Brown and made the pass, but Camden as well to take the win.

“I thought that was the stock class!” Brown grinned after the race. “Those guys were throwing roost!”

Tanner Alexander grabbed the 50cc Modified Amateur holeshot before getting passed early on by Steve Lovazzano. It wasn’t long, though, before Lovazzano tangled with a lapper and hit the dirt, handing the lead to Justin Anderson, who went on to take the win over Ben Hunkins and Joel Murphy. Lovazzano recovered for fourth.

With hindsight being what it is, most would agree that the 50cc Pro race that came up next should’ve been the headliner, instead of being stuck in the middle of the program. However, Arenacross regular Tommy Hofmaster grabbed the holeshot over Guy Cooper and company to start the main event, and Cooper went by right away. What ensued was talked about throughout the weekend. Absolutely some of the best racing witnessed in quite a while.  Continued…

Cooper began to pull away while McGrath pulled into third and started pressuring Hofmaster. “I was just trying to be smooth and pick good lines,” McGrath said.

Pingree went down with a lapper while still pressuring Hofaster, and then while McGrath was busy working on Cooper, Hofmaster got by, and the two quickly moved their way around Cooper, who faded our of the picture in third. “I just got tired out there!” Cooper said.

McGrath shoved his bike under Hofmaster on the last lap, only for Hofmaster to hold it on across the finish and take a much-deserved win over one of the greatest riders of all time.

“I can’t believe it,” Hofmaster said. “That was so much fun! I haven’t had a battle like that in a long time.” 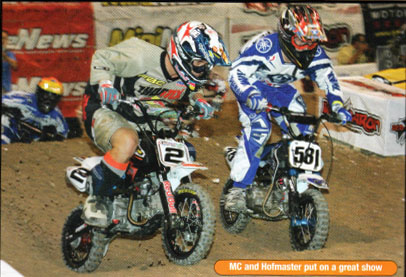 “Tommy rode a great race,” McGrath said. “We were both putting ‘em down out there, and Tommy just plain beat me.”

The crowd hardly had a chance to sit down before Mike Collier grabbed the holeshot and dominated the entire Midsize Amateur main from the beginning to end over Josh Camden and Dennis Humphrey.

McGrath grabbed the holeshot to start the Midsize Pro main over Cooper, but Coop moved by quickly and led the main event for quite a while before he ran into a downed lapper and fell, handing the lead – and the win – back to McGrath.

McGrath led the rest of the way over Mike Northrop, who finished second just ahead of Cooper and Pingree.

Jamie Little put on her racing hat – err, helmet – in the Women’s class, and led the whole race going away. That is until she got a little overexcited and hit a foam block and fell – hard.

“I just got nervous leading that whole race and I couldn’t hold it together,” Little said afterward.

Delaney Rond, on a pretty stock 50, took the win over Little, who recovered on her 110 for second.

“My friend told me to come out here and race, and I really didn’t want to at first,” Rond said. “Now I’m definitely glad I did.”

Scott Murphy started the Clutch Amateur race off with a bang, as he absconded with the holeshot and let early until Joe Linza made a pass stick for the lead.

As Murphy tried to get back around, he went down hard in the rhythm section, affording Linza a bit of a lead. Slow starter Casey Stancil made a late-race charge to take the lead and win while Linza put on a slow fade to sixth.

The last standard race of the night was the Clutch Pro event, where Rich Taylor took the holeshot over McGrath and yet another Arenacrosser, Brad Hagseth. Taylor lost the lead when he hit neutral in a turn, and Hagseth moved to third before Taylor could recover.

Jeff Stanton came from behind to stuff his way past Taylor for third and then set out after Hagseth, but he came up just short at the finish. MC took the win over Hagseth and Stanton. “I just ran out of time after that start I had,” Stanton said.

McGrath nearly pulled the sweep at the MiniMoto SX. “Yeah, if it wasn’t for Hofmaster, I could’ve won everything here, but he rode great and he beat me straight up,” McGrath said. “This is one of the coolest events I’ve ever seen, much less raced in. I mean, I’ve been riding most of my life and I’ve never had more fun than I did thought.