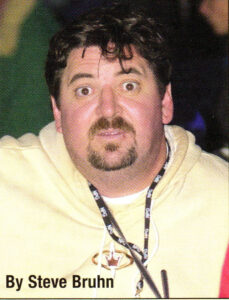 Jeff Stanton is not that fast. Ricky Carmichael and James Stewart don’t want to race me. Grant Langston, Chad Reed, and Ernesto Fonseca like my style. Those are just a few of the things I learned over the summer after racing the MPN Mini-bike Nationals as a full-on factory rider on an American Suzuki/Sano/Thor/Alpinestars/M2R/Dunlop/Scott DRZ110.

Okay, I lied. Stanton dusted me, but hey, he never lapped me once! RC and Bubba can’t do mini races because their contracts say no, and if they got scraped up on a race weekend, their teams would freak. But that is part of the fun of adult mini-bike racing – lying!

I would say racing minis is about 25% riding and 75% talking smack. Before the Binghamton National, Dr. Bodnar and I traded emails for two weeks over who was going to throw dirt on whom. I roosted him all summer, so that guy is just all talk. Before Unadilla, my good buddy Steve Bauer was all over the internet saying he was going to show us he still has game. I spanked him both motos, and Carl Stone has photos of him cutting the track to make up time!

This summer, I passed supercross announcer Jamie Little twice and lined up on the gate with names like Gary Semics, Jeff Stanton, Trevor Vines, and Denny Stephenson. To be honest, I pretty much got dusted, but I still managed national number 5 – since I made so many races. Rob Buydos better look out next summer, because I am not gonna let go of the throttle – even on the big jumps. I always feel a lot faster when I’m on the way home. I’m really brave – in the van.

Years ago, when I was racing Amateur Supercross with my friends in Florida, we would talk on the way to the track about “the catapult” – a 70-foot double that only a few of the top pros would clear. I wasn’t anywhere near the pro class and we were just rolling over it, but in my mind I knew just what to do – rail the turn before the jump in third and just pin it. Easy. Well, it sounded easy, but I would never do it – I just liked knowing that I would (at least I think so as long as I am in the van on the way home). I can think of a few jumps from this summer I should have pinned it on. I could have won. Next summer, I’m not letting off. I’m brave – right now.

There are a lot of you out there who are just like me. You never made it past the Intermediate class, but you know you have the skills. You just needed to wait until next time, and next time never came. Instead, you went to college, and/or got “the job,” settled in, and then realized, “This sucks. I need to be racing again.”

Minis are a great way to get the fun back that you remember from racing, but without the same risk. You can lie about a mini-bike race just as much as you can about a big race, and still make it to work healthy the next day.

As much fun as last summer’s mini-bike nationals were, I still didn’t get to kick all the butt that needs kickin’. We need some French guys out there so I can roost them. I’m calling out Stephan LeGrand from Moto Verte and Eric Peronnard, founder of the U.S. Open! Also, where was Lou Lopez from Parts Unlimited? You guys are chickens!

While we’re on the subject, let’s talk about the former MX Champion Guy Cooper who raced all summer on his Extreme minis. He was in the 50cc class! Those things are for the kids. Get a 110 and let’s throw down! I am brave, and ready.

One guy who wasn’t chicken all summer is Rob Buydos, the inaugural National Champion for the “no clutch” or mid-size class (110s and 90s). Rob made every race and wasn’t always ahead of Jeff Stanton, but when it was time to hand out the #1 plate at Steel City, Buydos was way ahead in points. At High Point, when it was so muddy the bikes wouldn’t even go straight, Buydos was like David Vuillemin at a wet supercross – super fast. Next summer, through, he’s toast.

I don’t need the best suspension and the fastest motor, because I’m brave. Next summer, I am going to pick lines where I just pin it and no one else will have a chance. Cooper will want to stay in the 50cc class when he sees me practicing. Stanton will give up. Buydos will have to try not to get too attached to that #1 plate.

There is a jump called the Dunlop Jump at Binghamton that is maybe only 20 feet, but the face has a high lip so some of the pros can turn it into a triple. Just before it is a second-gear sweeper where I knocked Fish from Scott USA down when he tried to pass me. I am going to rail that thing so hard next summer, no one will have a chance. We’re talking total WFO here, because I am fearless. I can picture it now – throttle pegged from the turn before it, all the way to the turn, never letting off and nailing that jump WFO. I have done that jump 100 times since Binghamton – starting with the first time I cleared it, in the van, on the way home.

Editor’s Note: When Steve Bruhn is not racing Pit Bikes, he can be found crawling around both Supercross and National tracks taking photos. He is more commonly known as “The Factory Spectator,” and his words of wisdom can be found on the very popular www.motonews.com website.

This is the lap I decided to just pin it and see what happens. It was fun going up, but not too fun when I landed.