So You Want To Start Racing Mini-Bikes, Huh?

Well, let me warn you right now: It will probably be the most infectious experience you’ll ever had.

If you’re at least 18-years-old, the first thing you need to do is go buy a bike, so I will explain how we run the classes at the Nationals to help you choose the bike you are most interested in racing:

The Honda XR/CRF50 is the bike of choice for this class – the teeniest bike of the bunch. These bikes have the most potential for hop-up, with literally hundreds of options in displacement and suspension, as well as wheel and graphics treatment. Z50s – basically the same bike – still make their presence felt when they show up, and Guy Cooper’s Xtreme 107cc mini fits in this class as well – although they have clutches (even though this is technically a clutchless class).

Besides the obvious “How can a bike with a clutch be in a non-clutch class,” you’re probably also asking yourself, “How can a 107 be a 50?” Well, to be honest, nobody has a stock 50. All of the motors are built bigger than stock, so to keep from hearing people complain, we just include those in that class, since they’re basically the same size. These bikes also take the most skill to ride – they are really prone to swapping violently if you modify them too heavily or move around too much on them. They really require your full attention.

This is the fastest growing class over the past few seasons. Instead of just Hondas (and Xtremes), the Mid-Size Class features multiple brands, from the XR/CRF70 to the TTR90, KLX110, DRZ110, etc. And there are a lot of really cool hop ups for these bikes.

For the blue guys, Yamaha makes two bikes – the PW80 (the only two-stroke we allow) and the TTR90. A few companies make motor kits for these bikes, and shocks are also available. Aaron Smith and Trevor Vines seem to be able to make these bikes move pretty well, so they are a good choice for the mid-size class.

Kawasaki really got a late start on pit bikes, but they sure made the most of it when they introduced the KLX110. This pit bike is really gaining momentum. The bike has a very strong frame that seems to be impermeable to damage, and with companies like Pro Circuit and Two Brothers making performance parts for them, they’ve become an excellent choice. The other practical aspect of using the Kawasaki is that all the plastic off the KX685 fits, so color and graphics options are huge.

Finally, there is the Suzuki DRZ110 – the same bike that carried Steve Bruhn to his national #5 plate. Basically, the DRZ110 and KLX110 are the RMZ250 and KX250F of the pit bike world. The DRZ110 is the same as the KLX110, only yellow, and the plastic and graphics from the RM65 fit, so once again there are lots of options to make it look race-ready.

The skill level required to ride these bikes is more average compared to the 50s. You can ride them a little more like you would a big bike.

Then there’s the clutch class.  This class has actually been around the longest – dating back to the mechanics’ races of the early ‘70s right up through Langtown. There are a few clutch bikes to choose from, including any four-stroke, air-cooled pit bike under 150cc with a clutch. They include the XR/CRF80, 100 and 150, the Yamaha TTR125, the Suzuki DRZ125, and the Kawasaki KLX125. (Once again, the DRZ and KLX are one in the same, but with a different hue.)

These bikes also can get a bigger than the mid-size class, but the clutch bikes can get to be about as big as a normal 85cc two-stroke race bike.

Got The Mini Bike, Now What? 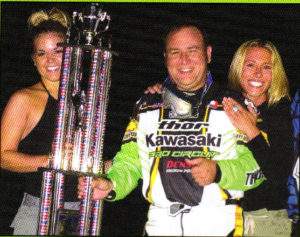 Once you get the bike, you will need to upgrade quite a few of the components and make sure you have the correct apparel. I’m a Parts Unlimited kind of guy, so I bolt on Renthal bars, Pro Circuit pipes and rely on Thor, Scott goggles and Alpinestars boots for my protective gear. I prefer the M4 Boots over the Tech 8, though, because they break in so easily and are not so tall.

The aftermarket companies, like BBR Motorsports, Metaltek, Sano, etc., really have some awesome bolt-on parts that add a lot of strength to these bikes, not only in the horsepower department, but the chassis as well. You’ll need to do something to your stocker in order to compete at this level, even though just a bar kit and tall seat might work if you’re riding in your backyard.

At the Nationals, practice and two motos of racing should take under two hours – after all, that’s way more fun than being stressed for ten hours, like at a big-bike race. In addition to the 50cc, Mid-Size and Clutch classes, we’ll sometimes include a Women’s class or a Senior class, depending on demand. You are free to make the cut any age you want to call yourself a senior, but we tend to use 40-years-old as the cut-off point, and the bikes should be the same as the ladies – non-clutch. If there are enough clutch and non-clutch riders in these classes, we will separate them.

Well, that about wraps it up if you want to race adult mini-bike races. Just decide where you fit in and go get your buddies to go buy bikes. All you need next is a field of dirt to build some berms and then go have some fun.

After all, isn’t that what it’s all about?

Editor’s Note: When not promoting and working for Parts Unlimited, Rob Buydos is the self-proclaimed MPN National Mini-Bike champion. If enthusiasm for this sport were money, Rob would be the richest man in the industry.