That’s about all I can say about the response we received to the first issue of MiniMoto Magazine.

Who would have thought that a magazine dedicated purely to small bore, four-stroke motorcycles would have stirred so much interest. It’s no wonder, though, with the sheer number of these bikes out in the marketplace and the number of companies making performance products for them. I was really not that surprised.

I was surprised, though, when the phone rand and on the other end was Jeremy McGrath. We all knew that MC was big into Minis but when he offered to make time in his schedule for a photo shoot to be on this month’s cover, I really knew we were on to something. Not one to waste an opportunity, I contacted photojournalist and www guru Steve Bruhn and made arrangement for him to meet MC and Brian Miller of FIVEO RACING for the shoot in Britain’s backyard. We think the results produced our best cover to date (yeah, I know, it’s only our second issue) and some great backyard motocross photos of MC – see page 30 – along with a Q & A of Jeremy’s take on the Mini craze.

We also decided we needed an updated look for our logo. Many thanks to Marc Blanchard for the new design… another reason why this is our best looking cover to date.

So what’s next? Why not put on a Mini race? We’re not talking just any race race though, we’re talking Vegas, Baby. After a couple visits to the city of sin, we decided on the Orleans Arena as the perfect venue. April 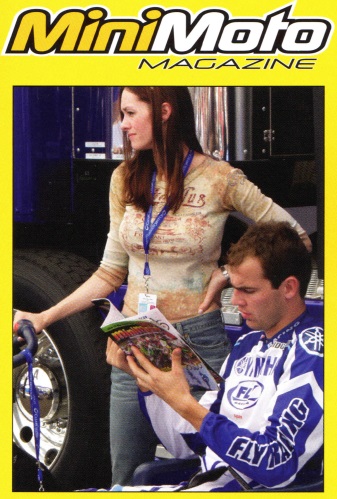 30th was a no-brainer since the town will be full of motocross enthusiasts that weekend. We wanted to put a race that would put the Minis on the map and Vegas is the perfect place to do that. The MiniMoto SX National was the name we decided on. What we needed next were a handful of sponsors… a special thanks to Jeff Fox and PARTS Unlimited for coming on board as the title sponsor. If you are into Minis, and we know you are since you are reading this, you do not want to miss this event. You can either come race it or come watch it, either way, we’re pretty sure you are going to have a great time.

The entry list to date reads like a who’s who of motocross. McGrath, Stanton, Ward, Pingree, Vines and whole lot more will be racing at the PARTS Unlimited MiniMoto SX National. Riders from as far away as Australia, Canada, France, England and New York, New Jersey, Florida          and Georgia are already signed up for the race. And, Aaron Smith will be on hand to entertain the crowd by back flipping his TT-R90. All that‘s left is for you to check out the next few pages and make arrangements to come join us. There is a Race Entry form on page 14 and the Class Rules are on page 15. And if want to come spectate you can find the ticket information on our website at www.MiniMotoSX.com. Oh yeah… we had to build a website… thanks to Brand Zimmerman for helping us out under such a crunch deadline.

Thanks for supporting MiniMoto. I would love to hear what you think about this issue, drop me a e-mail when you get a moment. See you in Las Vegas!